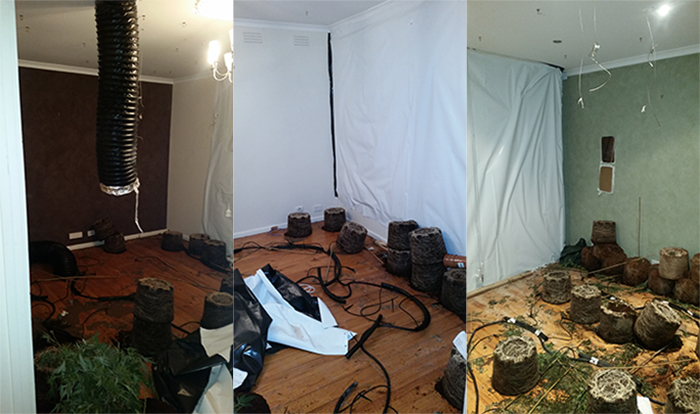 Scary drug house story – why you should work with your agent!

Below is an abbreviated version of a story published on domain.com.au in relation to an agency who seemed to care more about getting the money to the landlords whatever the cost, more so than doing the job properly to ensure the right tenant is found.

A recent VCAT case and consumer affairs investigation has recently found a south east Melbourne agency guilty of breaching the agents code of conduct.  It has been found that said agency leased 21 properties to a local sports bar manager.

Said sports bar manager, then aged in his mid-60s, worked with a multimillion dollar drug syndicate and used the properties as crop houses.
Following police raids in January 2015, officers seized 1200 plants, the head tenant was charged, convicted and sentenced to jail.
The agency responsible for managing these properties, was found to be not exercising due care and diligence.  The property manager involved (son of the owner of the real estate agency), said he accepted the sports bar manager’s explanation that the properties would be occupied by workers or students.  And this is why standard documents were not obtained, including but not limited to application forms, bond lodgements, bills, condition reports or routine inspections.  The paperwork had not been completed properly or in line with company policy due to ‘considerable work pressure at the time’.

Elisabeth Wentworth, who presided over the VCAT hearing, said: “Whatever the plausibility of that explanation, I was not satisfied that any such explanation would be a sufficient reason not to make sure the paperworks in respect of each property was complete, and the landlord informed.”
In handing down her findings, Ms Wentworth said the company had failed to comply with the Estate Agents Regulations and Estate Agents Act.

What is the lesson to be learnt here? (Aside from do your own due diligence when choosing a trust worthy estate agency to look after your property?), be prepared to find the right tenant!

If the above agencies explanation is to be believed – the likely scenario is that there were a number of vacant properties, all demanding tenants, and along came someone who was ready to rent them straight away.  Where people care about nothing but money and getting a tenant in, this opens the door for any poorly supported PM to let someone unsavory to slip through the cracks!

Smart investors work with their agents, while good agents put applications forward to the owners (With information on the applicants other than how much rent they’re going to pay and when they’re moving in) for their consideration with their advice.  Together, good agencies work with their landlords to get the best outcome.

The best applicant, generally speaking, is not the one who can move in the soonest who wants to pay the most rent! Choose the one with the best references that fits the property and the landlords needs.

Have you ever had a tenant nightmare?  Did you ever end up in strife because an agent simply put the first person into your property who had a pulse?  Are you currently suffering through such a tenancy?  Get in touch with me!  It certainly keeps property management interesting fixing up unsavory tenancies and I get great satisfaction in turning a poor tenancy, into a long lasting business relationship once new quality tenancy is created!

Keep up to date with our blog